Do you know of an event or article not mentioned here? Submit one!

The new plates start with FGF 100, and will be general issue until Dec 31, 2009. More information has been posted on my new Alaskan License Plates blog. Also covered by the Anchorage Daily News and KTUU.

09/05/2005 - Alaska Plates and members of the Automobile License Plate Collectors Association are hosting their annual Alaska License Plate Meet on Saturday, September 17th, from 10 am to 4 pm. See the 2005 Meet Page for more info.

03/08/2005 - The Anchorage Daily News runs a story about the Centennial plates ending. It's the headline of the front page! On the back, there's also a Q & A that has information from me and this site. 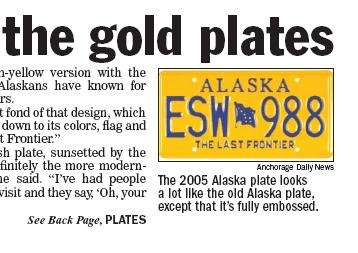 I drove across town to loan them this E-series plate for photographs; it's the one about to go on my vehicle. :)

In the article, Peter Porco refers to me as a '"taxonomist" of Alaska license plates' in the Q & A section, which amused me greatly. I said it in a sort of off-the-cuff manner, and didn't expect it to make it into print -- but I can't say that I'm displeased.

I was a bit disappointed to see that he didn't mention the web site in the print version of the article, but the online version of the story has a blurb about me:

Royce Williams, an Eagle River computer specialist who calls himself a taxonomist of plates, says his hobby of spotting plates is "like birdwatching, only with more car exhaust." Williams maintains a site devoted exclusively to Alaska plates, including data about the oldest plates, plate patterns and rules, collections, scores of photographs and other information.

Though I'm not from Eagle River, I do think it's a nice town. :)

All in all, some great exposure for Alaskan plates!

12/31/2004 - The Centennial run of Alaska license plates has ended. This was scheduled by the original legislation providing for the Centennial plates. The new plates are back to the old blue-and-gold, with a few notable differences.

Who Decides Which Alaska Vanity Plates Are Offensive?

The Anchorage Press prints an article about Carl Springer, the DMV registrar who decides whether or not plates have "ethnic, racial, vulgar, or indecent connotations".

11/03/1998 - APRN - It was announced on Alaska Public Radio News this morning that the State Council on the Arts is accepting submissions for a new Alaskan license plate commemorating the arts.

This plate was authorized this year by the Alaska State Legislature in Senate Bill 153.

"Upon application by the owner of a passenger vehicle, noncommercial van or pick-up truck, or motor home, the department may issue registration plates commemorating the arts."

The income from the sale of these plates, above and beyond the cost of issuing them, may be appropriated by the legislature "for the support of programs benefiting the arts."

SB 153 also authorized plates for dog mushing (no news on this yet) and amended the law about the issuance of University plates to rule out commercial vehicles (See AS 10.28.181).

Submissions are due December 5th. You can contact the State Arts Council at 269-6610.

01/24/1998 - ANCHORAGE DAILY NEWS - Alaskans are now able to choose between the standard plate a new "Gold Rush" design, or they will be able to exchange their old ones for the new plate for $5.

The new plate will be available until 2004.

The new design depicts miners crossing a pass similar to the Chilkat Pass during the 1898 gold rush.

DMV activities now available on the web and via 800 number

The new system cost around $8 million dollars and takes advantage of recent advances in web encryption technology to protect credit-card and other sensitive information.

Many activities are also available via the DMV's new toll-free number, 1-888-DMV-KWIK.

Personalized plates, their censure, and their interest

01/20/1997 - ANCHORAGE DAILY NEWS - Quite a substantial story about the censure of Alaskan personalized license plates. Highlights include:

Passenger plates set to cross from C- to D-prefix

06/27/1996 - ANCHORAGE DAILY NEWS - A small story from the Associated Press in today's paper about the new prefix. It was noted that the C prefix has been in use since around 1987.

Exclusions (including DAM, DDT, DED, DEM, DMV) were mentioned. Mention of the exclusion of DWI and DUI was also made, along with other prefixes.

[Note: these would already be excluded due their containing the letter "I" - cf. the Alaska License Plate Rules.]

11/01/1985 - ALASKA MAGAZINE - A man named Albert J. Haller wrote a letter to Alaska Magazine asking readers to send him their old Alaska plates. This one-page article, written by Haller, thanks the readers who responded and talks about the history of plates in Alaska.

Interesting points include the rarity of Alaska plates among collectors and watchers in the Lower 48, and info about when logos and artwork appeared.